I remember my first languages lesson Monsieur Lewis spoke no English to us whatsoever and we sat wide-eyed and puzzled as to whether this man was indeed French and if we would ever understand what he needed us to do. We followed his waving arms and tried intently to please the French man stood before us. In fact it wasn’t until we passed the staff room later that week and heard him speaking to another teacher that we found out that he was in fact English and le mystère was gone. If it hadn’t been for his gestures and his, what I now know to be routine classroom French, we would have been quite lost his classes at first. This amazing chameleon-like ability to become a different person inspired me. The next year I met Monsieur Clarke and Señor Williams and their passion for language and the culture with the logic mixed in by the grammar was another thing I found really interesting about studying languages.

So off I went to la universidad, having studied two languages at A-level, thinking that a business degree would be a good thing to put my with Spanish degree in order to get me an excellent job in the business world. Teaching was something that just happened to me. I had always enjoyed making up silly sentences and had played schools with my sister and friends so becoming a teacher rather than travelling the world as an interpreter became my chosen path.

During my teacher training I remember being surprised that not all children enjoyed learning languages as much as I had. It was a humbling experience and a real time for me to learn how to share my passion for languages with students and how to encourage them to give it a try even when they found it defied all logic and was rather confusing to remember that un ratón was a mouse and not a rat or that accents go both ways in French and can look like hats and tails too!

In an inspector pleasing world much emphasis was always placed on gaining as many ticks on a clipboard as possible. I was always keen to make those ticks work for mis estudiantes and so would listen with great interest as the latest great idea was shared with staff. I would be the first to volunteer for any new training that came along. As with all things in education new ideas came and new ideas got passed up when the next big thing came to town. 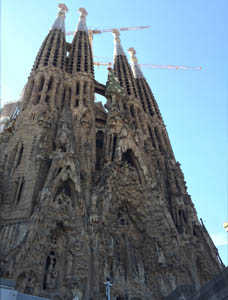 During my teacher training I learnt how to make fun little games for an overhead projector I could get thirty children to squeak like mice, chant like robots and learn key vocabulary whilst performing interesting vocal exercises. Then the next big thing came along and we moved to PowerPoint. The same games could be played but needed to be thought carefully through in advance as you had less flexibility than before. Then came the zooming presentation and it is grâce à Prezi that I am in my current job, but that’s a story for another day.

I am incredibly blessed at my current school. For the children, joining in with their language learning it is definitely more valued than before. However, the “everybody speaks English” excuse still surfaces and it is my challenge to keep them going and make them feel inspired.  The most effective way is to give them oportunidades to see languages work in the real world. Going to a market on a recent trip to Seville I saw the light in a student’s eyes as he actually managed to haggle down the price in Spanish and he was very proud indeed of his purchase.

La créativité for me is key. It keeps me interested and engages my students. A job that offers you the chance to be on a desert island one lesson and working in a chemist’s shop the next is great fun. Looking at poetry through the eyes of a linguist not only unravels the poet’s intentions but the complexity of their words on a grammatical plain adding a further dimension to the poem. I love setting up cafes and writing comic strips as well as singing songs that can get stuck in your head for days.

GCSEs and A-levels have changed since I trained and I am watching intently the changes that the new GCSE and A-level will bring our way en Septembre. My colleagues and I will take these changes in our stride and plan opportunities to prepare our younger students for any extra challenges it may bring their way. I am optimistic that my students will be able to rise to the challenge and follow other students who have gone on to read languages at Oxford, study Spanish with Business like me or even spend a year working abroad before their degree begins.

My reasons are as follows: