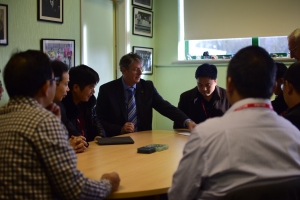 This last week we hosted 10 Chinese Principals, two interpreters and a facilitator from the National College and University of Nottingham, International team. I would be interested what other SLT, Heads and teachers make of these sorts of visits. All the way from Guangdong they arrived to spend about a month in England with some tourism and much work together on leadership and five days of school visits in three schools, one of these was two days with us.

For me one week into headship is was a genuine privilege to show the school and work out how to do that. In fact as a deputy I always considered it an honour if anyone wanted to come and visit the school, we have had other overseas visitors but of course other school teams, business people and even the odd MP and councillor. I have also enjoyed my own visits to other schools – after all we are all lifelong learners.

They started with a tour of school accompanied by 6 ‘little people’ from school council in pairs with a translator and 3 adults – I was so proud of our Y8 children who returned dutifully with the visitors spot on time, and with big smiles – they had enjoyed showing off their school and answering questions. They then observed lessons in a number of subjects, frankly ones that can manage 10 visitors plus two interpreters plus two of our own mandarin speaker helpers ( who were wonderful – aren’t children jus so able to rise to the occasion). I also arranged it to be Maths and Science (my prejudice, we do these quite well) and also creative areas: Design and Art and also Modern Languages (which we also do well!) Colleagues were very accommodating in fact so were their departments, it’s not really easy being observed as visitors come around, chat with you and children and take a few photos in fact a lot of photos. 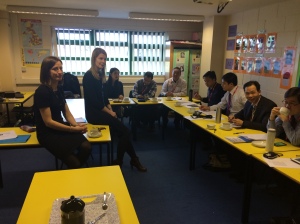 I also arranged a few talks which I thought might be interesting: about our school and my (new) vision and after some basic stats, some narrative about the best parts and some guesses at the worst (only done a week remember), some budgets some accountability stuff some stuff about what I think is important and some which bother me about the future. They also heard about our pastoral work and how we teach English and the role of a middle leader. We finished with discussion between them and 5 staff. There really wasn’t enough time to answer their questions perhaps some were too hard – ‘how do you show an ethos to your pupils and help them learn to appreciate it?’ 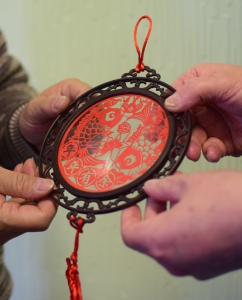 They brought gifts,, some beautiful China cups through to beautiful handmade pennants and even pupils work. Which meant more photos. This showed me how much they honoured the occasion and I was particularly struck when I introduced a colleague who had taught for 30 years they applauded very warmly in their acknowledgment for him as a teacher, clearly for them he had to be recognised and very well honoured, such respect I think even he was surprised. I think we can learn something there.

So what did we find out:

Overall they came to learn, and to honour us, which they definitely managed to do. I wished we had had more time for me to find out more but it was their visit to us. From our point of view we have all learned things too, but three things really struck me:

1 Their honour, respect, and pride in their profession and in us too, shown to me and my colleagues as well as our children. It was almost tangible and amazing to watch their faces hanging on almost our every word.

2 Whatever I read about Chinese schools and Maths and standards and PISA number 1 etc they aren’t too different in the questions they ask and the systems they develop and the ambitions they all have, their worries and their commitments

3 In the end their interest was in the children in their care, their learning progress and even their morals – so despite the cultural journey and 5000 miles, not that too much different

Here is a link to the story in our  Local Newspaper  Nottingham Post.

Q1 What do you see as the value of such visits to your school?

Q2 Can we learn from other cultures as much as we can learn from schools in the UK, be they similar or with better outcomes?

Q3 Do we have more in common than what we have as differences?

For those in a Church school

Acts 28:7   There was an estate nearby that belonged to Publius, the chief official of the island. He welcomed us to his home and showed us generous hospitality for three days.

3 John 1:8   We ought therefore to show hospitality to such people so that we may work together for the truth.

Proverbs 29:18    Where there is no vision, the people perish: but whoever keeps the law, will be happy.